The Internet has long ceased to be the preserve of grown-ups. Children today are often far more active Internet users than their parents. But is it safe enough for children to use without fear of facing inappropriate content? To find out we decided to investigate potential online threats to children.

The research is based on data processed by Kaspersky Security Network. We analyzed data from more than a million Kaspersky Lab customers. Each of them had encountered dangerous content at least once in the last year.

The results show that more than half (59.5%) of users encountered pornography; over a quarter (26.6%) landed on websites dedicated to gambling; every fifth user stumbled across sites featuring weapons; and almost the same number were confronted by strong language. 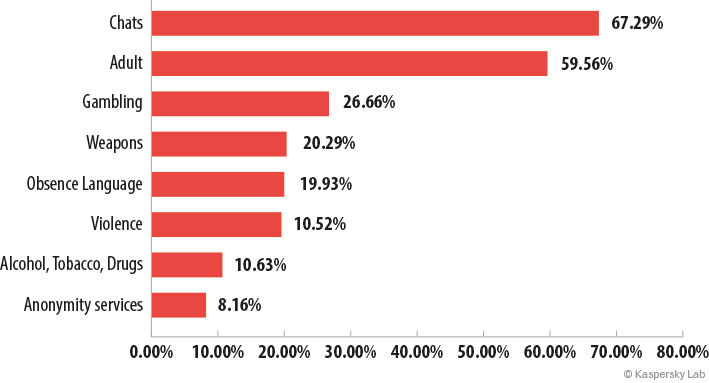 Two thirds (67.29%) came across chat services. Only a small proportion of these services, such as those with anonymity functions or predominately adult subscribers, represent a potential threat to children. As a result it is difficult to take overall chat service encounters as an accurate indication of the level of risk to young people. However, the data does confirm the popularity of chat; and the greater the popularity of chat services in any given country, the greater the probability that children might occasionally or even intentionally enter into an unsafe chat environment. So, if nothing else, evidence of frequent encounters with chat services could be a sign for parents to pay more attention to the nature of these services and the likelihood of their child being drawn in.

Websites carrying these kinds of inappropriate content (adult, chat, gambling and weapons), along with others featuring drugs, tobacco and alcohol, were the ones blocked most often by Kaspersky Lab protection solutions. The frequency of detections demonstrates just how easy it is for users to encounter such content online. The higher the frequency: the greater the probability.

The most frequent use of parental controls were from China, USA, German, the UK and Russia #KLReport

In geographical terms, the countries with the most frequent Parental Control detections were China, the USA, Germany, the UK and Russia. France, Vietnam, Brazil and Algeria also ranked in the top ten in terms of inappropriate content detection – but were relatively safer due to a lower frequency of detection.

Each of the top ten most affected countries has its own distinct characteristics when it comes to the prevailing online threats for children. For instance, adult content was the biggest threat to users in Germany (with 172 detections per user), China (144.18 detections per user), and the US (126.16 detections). Content about alcohol, tobacco and drugs was a major threat to users from Russia, Germany, the USA and France. The frequency of detection was especially high in these countries. This kind of content also proved popular in Brazil and the UK.

The fact that the threat landscape for children changes significantly from country to country is one of the most remarkable findings to emerge from the research. It is a clear sign for parents around the world to pay special attention to what their children are doing online in their own country, as every situation will be different. To protect young people, we recommend that adults choose protection solutions with Parental Control technologies and make full use of safe “children” modes in search engines and applications that allow access to multimedia content and which are used by children.

However, although Parental Control technologies can block access to web sites with content that is dangerous or distressing for children, they cannot offer reliable protection in situations where safe-by-default web services like social networks or chats are misused by predators or users conducting cyberbullying campaigns.

Internet security deserves to be taken as seriously as real-life physical security. That’s why we urge parents to take an active part in their children’s real and digital lives. Only then can they be sure that they won’t miss the moment when their child might need their support.